Michael has been an enormous figure in the coal trade for over seventy years, and during his long career which in commercial terms was with his family company G. Bryer Ash and then The Western Fuel Company, he has also distinguished himself in the Coal Trade Benevolent Association, The Coal Meters, The Fuellers and The Coal Merchants’ Federation to name just a few of the organisations to which he was deeply committed . 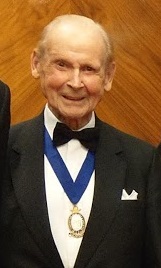 Michael was National Chairman of the CTBA in 1981 and shortly after became a Trustee, a position he held until 2011 and discharged with incomparable skill and diligence. Members will know of the support Michael gave to each and every branch, and over the years was a regular attendee at fundraising events. He will be hugely missed and remembered with great affection.

We are not yet aware of funeral arrangements but will advise any members so wishing when such details are confirmed to us.